Silverstone is almost 2 hours from where I live but when they announced they were putting on Lapland, I knew I had to go.

Lapland was the opportunity to drive your own car (safely) round the iconic Silverstone circuit, at night with surprises in store and a drive in cinema to watch the snowman to end the experience. I did debate it as it would be almost a 4 hour round trip for something that would take no more than 2 hours. That's when I remembered the Silverstone experience! I have been wanting to go since it was first opened so now was the time, lets kill two birds with one stone and make a day of it!

The morning was spent driving up to Silverstone and timing it perfectly to eat McDonald's in the car and follow the last F1 qualifying session of the year. Then it was time to drive to Silverstone and into the experience! Masks had to be worn at all times and hand sanitiser was available, I felt very safe. Part of the experience was to walk a little bit of the track and we were advised that due to lapland that would be closed early, so first on the agenda was to go outside! It had been raining on and off all day and we were so lucky that when we went outside, it was chilly and a bit windy but the sun was shining down!

Back indoors we went and stood in this dark corridor with a timer ticking down, we were then shown a video and the doors to the experience opened and we were in heaven. It went through how Silverstone was used as an airfield during the war, which I know will interest my dad for sure! Then it was almost like walking through time, there was a replica of a F1 car from the early years which you could sit in, I decided against that in fear of getting stuck!
I was just in awe of the stuff they had, all the things to look at and the activities they had! You could wave a flag of your choice over a barrier, try your hand at using a wheel gun and the funniest one would have to be the two brake pedals, one is for a normal car and the other one was for a F1 car and I could barely push the brake pedal for the F1 car! 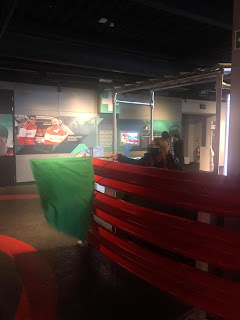 Then there was all these different cars throughout the era's, mostly F1 however there was one BTCC car which made me happy! I love both F1 and BTCC and I saw a mix of both, would have preferred a little more BTCC but something is better than nothing! They had helmets, trophies, overalls, boots. They even had entry lists with drivers name and their signature next to it. It was crazy to see how far motorsport has come and to see some legends signatures. 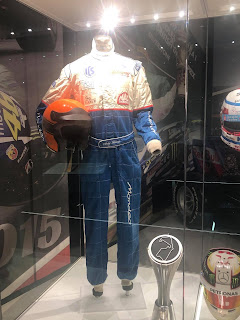 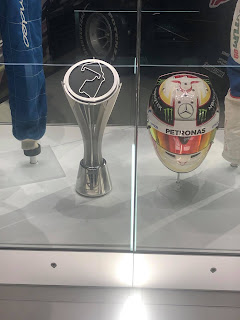 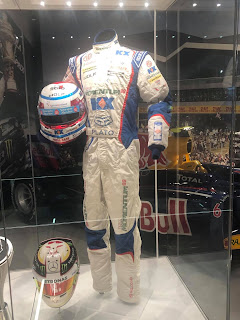 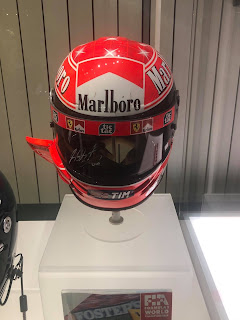 You could walk round the experience as quickly or as slowly as you like, I think we spent almost 2 hours in there, time went quicker than I thought! You just immerse yourself in whats around you and don't check the time, just embrace whats there. The last bit was a podium with a cardboard cut out of the Silverstone trophy. I could not resist taking some photos and re-enacting it. 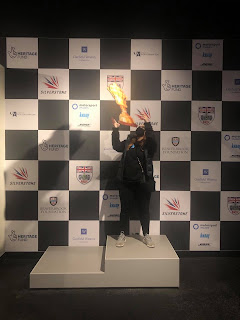 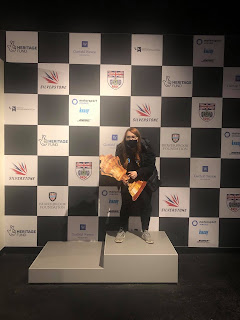 The last bit you sat in these seats and you were taken on the ultimate lap of Silverstone, I wont spoil any of that! It was really cool but it made me feel a tad dizzy. Then you walk into one of my favourite places, the gift shop. I am such a sentimental person and I love having something to remember an experience by, especially when it is such a happy memory. I bought a Silverstone tea-towel, made our own keyrings, I also bought a racing choc lollipop and I would highly recommend! I could have spent a lot more but I restrained myself, until my next visit anyway when I get more!
Then, it was off to the pub for some food and kill a couple of hours before returning for Lapland! I couldn't take too many pictures as I was driving but it was so much fun. It's just exciting driving on a circuit I love, have visited lots and witnessed so many good races. Of course I wish I could have gone more than 5/10mph but I really could take it all in. Especially when we went on the newly named Hamilton straight! There were elves dancing and cheering, Santa waving at you, all these lights and it was really really fun. On one corner I dropped back slightly so I could speed up a little bit and drive over a kerb, I couldn't resist! The car in the lane next to me did a practice start and I am so jealous I didn't have a go myself, could have seen who got the better start! 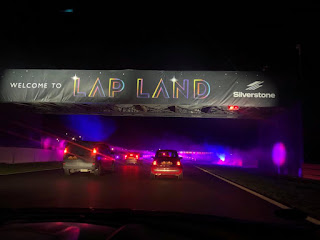 Once we had gone round the lap we were directed to our cinema screen where we could get out, stretch our legs, go to the loo and they even had some food and drink stands, although we stayed in the car. We had the Silverstone radio on which had Alan Hyde on, a voice I recognised straight away from BTCC. It was sad once the film was over because it means it was time to hit the road and head home.
In a year that hasn't been what anyone expected, it is a day that will go down as being one of my favourites ever that I will cherish.  I wish I had taken more pictures of everything if I am honest, but I know I will be returning! I hope Silverstone put Lapland on again because I think it was a success.
Silverstone experience and Lapland was a lot of fun, would recommend both to any motorsport fan!