I spoke to BTCC Eurotech driver Jack Goff at the media day held at Donnington to look ahead at the 2017 season. 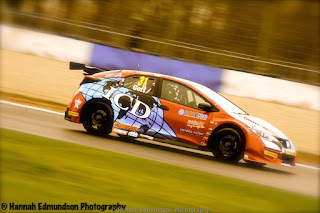 Goff had a very good day ending P5 out of the 32 cars which are taking part in the season. He believes it will be possible to achieve podiums and potentially wins early on due to the pace the car has. Goff said himself ‘pull my best sector times together (he encountered traffic during his best lap) and I think we are P2’ However, he is realistically in that he only knows what ballast and engine forms and testing programme his own team have done today. So, in that respect as much as you can compare his times to other cars, you cannot be sure.

When asked about who his biggest competitors will be this season Goff said straight away his team mate Jeff Smith. ‘Your first instinct is to check where your team mate is’ It is fair to say Goff didn’t know where Smith was when he got out the car today. Unfortunately, Smith sustained an injury which forced him out of testing during the media day and he decided to go for a walk about around the circuit. Although we never know, Smith could have gone to every corner and watched how Goff approached it. So maybe someone with Smith’s experience watching trackside may be able to give Goff some tips or noticed things which may make both their cars stronger.

Team orders are something which rear their heads every now and again in motorsport so I decided to ask Goff how he feels towards team orders if it came into play. There was no hesitation in Goffs voice when he responded ‘if I have 25kg ballast on me and Jeff has nothing and he’s coming up fast, then I will let him past and vica versa.’ Showing that Goff ultimately thinks about getting the best results for not only himself but for the team and the sponsors. These two clearly have a good friendship off the track and the same goals so this maybe a deadly duo. 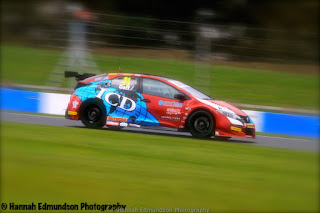 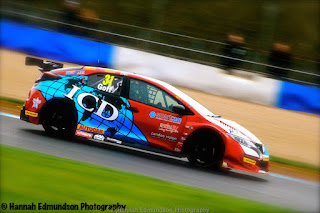 While waiting for Goff, Jo (press officer for Eurotech) mentioned that she keeps getting confused as Goff was wearing one of Smith’s race suits because Goff’s hadn’t turned up yet! Which led me to ask about a little rumour Jo had told me about the two drivers and their racing shoes. A couple of Smith’s fan groups noticed he took two pairs of shoes and it became apparent he will be called two shoes. It’s all fun and games with this team! That was evident for me to see as everyone was just so lovely and easy to talk to. Made it easier for me as I was quite nervous!

I always wondered if the first race weekend was mentally important for a driver and if Goff would be affected by Brands Hatch being a bad weekend. Goff informed me that for the last two years they’ve had podiums and it’s gone down-hill from there. It seems if he did have a bad first weekend, he would embrace it and it would only encourage him more. It is all about being in those fights for the points and chipping away. 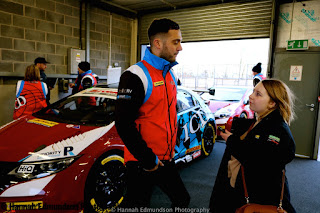 ‘At the end of the day points make prizes so we have to go out there and keep chipping away but also be consistent at the same time.’ By far my favourite quote from Goff, it shows how he knows it is not all about winning in this championship, it’s about being consistent and getting the points they can and taking whatever chances come their way. This is one driver and one team you need to keep your eyes peeled for. They will give 110% and they are going into the season with a strong car and a positive approach.

I would like to say a special thanks to Jo for giving me the opportunity to interview Goff and for their lovely hospitality and friendliness throughout the garage. Also to one of my favourite people Hannah for capturing the car in all their glory and me achieving a goal by interviewing a driver.