Why remember the name Ralphie Reeves?

May 30, 2019
Ralphie Reeves is a 6 year old boy from Basingstoke with big dreams.

He got his first go in a go kart when he was 3 years old, 3 years later he is already making sure people know who he is.

This year he can be regularly found at BTCC weekends with Team HARD, why you ask? Because Ralphie is the youngest driver signed to the Stilp HARD Academy. I am so glad he is as well because I had the pleasure of meeting him and learning who he is at BTCC Media day and he is the sweetest boy. 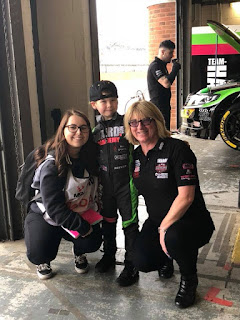 His local karting club is Shenington, Banbury. He finished 2nd overall in the UK kart championship at Shenington competing against 6-8 year olds. The youngest in his group so far demonstrating that he has a lot of skill already and we need to keep our eyes out. When he finished 2nd he only ran 80% of the championship and was 4 throughout most of it, only turning 5 with 3 rounds to go. If that isn’t impressive enough he is matching the lap times of others and he is using a 2012 kart whereas everyone else is using 2019 chassis'. Imagine what he could do with a 2019 chassis!

Ralphie trains a lot at a place called izone. Which is in fact run by former BTCC and current WEC driver Andy Priaulx MBE. The trainers that mentor Ralphie there said he was very special. In-fact calling him ‘a young superstar of the future’ after his first experience at the izone!

However, money in motorsport is never far from anyone’s minds, especially a child’s parent. Ralphie’s father Russell told me he always tries to get Ralphie to a track when possible and wants him to achieve the best and believes Ralphie has the talent to deliver this. His fastest time at Shenington on a kart matches the top 5 times which are set by 13 year old's. There is clearly big things to come from the 6 year old! But without sponsors and the money coming in to the help the future maybe sadly limited.

One thing that does work in their favour is Ralphie has already got an ever growing following. You can find him on Facebook, Instagram and Twitter. With lots of support comes exposure and when that is partnered with results from any races that will help draw in potential sponsors.

If you ask me Ralphie Reeves is a name and face you need to remember!