VIP with BTC Racing at Snetterton!

Wow, I still cannot get over how incredible Sunday was doing VIP with BTC Racing with Charlie, Dan and Jay. I have only done VIP once before with another team and I didn’t know what to expect but I was so excited as I knew everyone would be nice and we would hopefully have a good result.

So, first of all you arrive, we camped so we walked from campsite however you can be picked up from the entrance and taken to hospitality on a buggy. I for one love the buggies, I find them so fun. We arrived at dead on 9 (Paul one of the team had said be there by 9) and we were greeted by the members of the team, given our badges, had a quick run through of the day and sat out our table taking it all in.

We all grabbed a drink from the refreshment fridge which you could help yourself to throughout the day. Shortly after it was time for breakfast, there was plenty of choice, yoghurt, fruit and a bun with bacon, cheese and sausage in, it all looked lovely! There was 8 tables in hospitalit unit so nice and small and everyone on our table was nice, we all enjoyed breakfast and chatted about who we liked and what race we were aiming to get on the grid for. One couple we met was Jim and Ally who you may know from CMB Artworks who are just as friendly as you would expect and Matt with his Seb his 6 year old son. Seb was so cute, he loved Chris Smiley so much and went up and hugged him and his face would light up when he saw him it was the sweetest thing. People at motorsport events are always nice but I think we had the luck of the draw with our table.

After breakfast we had our garage tour. It started off with standing outside back of garage with a member of the team showing us the tyres and talking us through it all and explaining it all. Then we entered the garage and saw the cars close up and personal. We stood infront of Smiley’s car and again they told us about the car, showed us underneath the bonnet and a look inside. The team were happy to answer any questions we had. 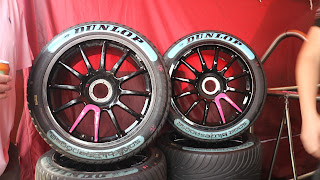 Next up was time to wait for the grid walk for race 1, how exciting! I love every chance I get to go on the grid watching everything unfold. The team getting ready, the driver sitting in the car prepping himself for what’s to come. The funniest part of getting on grid for race 1 is there is a height restriction and the marshall was holding a stick to make sure everyone was tall enough and I’m not going to lie it was a close call! Then it was time to head to the garage and watch the race. It wasn’t a bad race for the team but little did we know the best was yet to come. 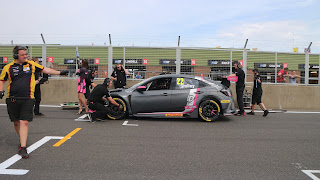 After race 1 it was time to walk back to hospitality and wait for lunch. I cannot lie to you lunch was so nice. Beef, cabbage, potato and the nicest gravy, followed by a gorgeous dessert to top it all off. We then stuck around hospitality unit watching support races and race 2 of BTCC. Before we knew it it was time for the driver Q&A where ITV4 commentator David Addison grilled Smiley and Cook on how they were feeling, previous races and the final race which is what we were all looking forward to; All while eating an afternoon snack!

Smiley was pulled for pole for reverse grid so we intended on staying in hospitality to watch the race on the TV screen but Paul asked us if we wanted to go on the grid again and it was an offer we couldn’t refuse. The BTCC field is big so looking down from pole I felt was a bit daunting so imagine what the driver feels like on the first lap, I’d be looking straight the whole time with my foot down! We all got ourselves set up in the garage to watch and hope Smiley could hold on with the hards and that Cook would storm through using the softs. A TV camera was stood just outside of the garage to get the teams reactions so we all wanted to look at one screen and the guy that talked to us about tyres earlier on in the day gave me a wet tyre to stand on as a joke, made my view a whole lot better thanks man!

I still find it surreal that we were going through just a fraction of the emotions the team did that day. The boys I had a fight on their hands and not just the drivers but the team as well got a result they work so hard for and deserve, a double podium! It was so heartwarming to see the team celebrate and how happy they are that their hard work and all the time and effort they put in was repaid that day. The podium was the same, full of energy and happiness and the adrenaline! I'm so happy I was front row for it too, got sprayed by a bit of champagne too thanks Smiley! 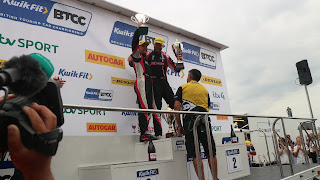 We then headed back via buggy through the traffic to collect our belongings from hospitality, still in this bubble of celebration. We had already had such a great day and that result really was icing on the cake. We cannot thank everyone enough for being so welcoming and lovely and treating us like we were family. Nothing was too much to ask, they all wanted you to have the best experience possible and I know myself, Charlie, Jay and Dan all did and we are eternally grateful.

Big shoutout to the whole team, Paul, Lindsay, Zoe, Debbie and my own personal security and chauffeur Stefan and the rest of the team! I am not sure when we will be back but don’t worry we will be!