September 18, 2019
Welcome back to part 2 of my marshal series, so glad you all liked the first part!

One thing I found quite interesting when I was reading peoples stories was their motivation for joining in the first place. It wasn't always a case of wanting to get closer to the action (although that's a bonus) but to immerse themselves into something new to escape the stress and chaos of everyday life.

Most people did say their love of motorsport and desire to be involved is what motivated them to train to be a marshal which I can completely understand. As one marshal Joe explained to me his motivation for continuing is that 'its a hobby that I enjoy immensely' and that's his motivation now which has changed from when he initially started from his desire to become more involved and 'the ability to let both fans and drivers continue to do/see what they love' I felt this statement is so important and reminds us how important a marshal role really is. Without them at their posts on standby or waving the correct flag or cleaning a mess up etc, we wouldn't have what we do. They are a strong main pillar of motorsport and that's something to be celebrated. Michael told me something very similar as he said he wanted to 'give something back' and a couple of other people said that to. However he said it took him a while to stop thinking 'I shouldn't be this side of the fence' I can imagine it feels wrong after being a spectator for so long.

Thomas told me his uncle is into marshalling motorbikes and he thought 'ill give it a try but it doesn't look like a barrel of laughs' 6 years on and he is still wearing the orange! Thomas has got the experience under his belt as he has helped a few trainee marshal and marshalled at F1 British GP this year (see pic below Thomas sent me) which he called his 'most epic achievement' considering he broke his hip in February. Personally I think that is amazing, he had a goal, he was determined and he did it, he loves it that much he couldn't wait to get back. He said 'watching motor racing on tv is okay but being trackside and actually in the action is so much better' and quite a few people have said something similar as Lewis told me he gets 'an insane adrenaline rush everytime we need to go do something' I would love to have heart rate monitors on marshals during a race weekend, bet it would go through the roof! Nathan echo'd this as well as he told me 'i love the buzz and excitement of race day' I suppose you never know what is going to happen and when (we can all relate as motorsport is very exciting and unpredictable especially BTCC) but you always have to be on high alert. 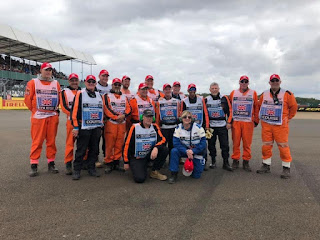 Jamie actually told me he was 'drawn in by seeing the marshal's react' when responding to any incident. No better way than to find out for yourself I guess! It appears quite a bit of motivation has been from either seeing marshal work trackside or knowing someone that has done it and been inspired by them which I think is lovely as it is probably the best way to give people an idea of what they do. Someone told me when he's gone to circuits he's seen the marshal's and thought 'it looks good' but he's sadly got some personal issues going on at the moment and he'd found marshalling 'a really good distraction and help' as the other marshal have been really friendly and like a second family. I found this very touching as it is a good example of a way to enjoy yourself and take some time out of everyday life with support from your own special family. 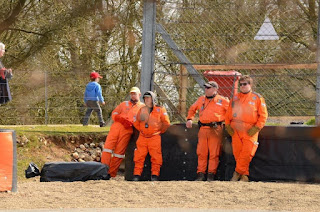 Hope you all enjoyed part 2, thank you to everyone who has sent me pictures, they have all been saved for more posts! Let me know if this has motivated you to think about potentially being a marshal or doing a taster day!