Marshal series: In rain or shine!

September 27, 2019
As a motorsport fan I know we are all so happy to wake up early and get going to a track to spectate but a marshal gets up even earlier and has a more tedious day ahead than us.

Andy told me he gets up between 5.45 and 6am so he can wake up, have a brew and breakfast and then head to sign on. You can sign on around 7-8am. Someone else said the sign on time can vary but they normally aim to sign on around 7:30am so they get up at 6:30 to get ready and make lunch etc. Gosh I'm not sure I could ever do that, I dont even wake up that early for work!

During signing on you find out which post you are going to be on for the weekend. Someone said saturday is 'always a guessing game of which post we will have this weekend?' Lewis is in charge of track marshal's at Knockhill and he said they spend a lot of time doing post briefings and making sure everyone knows hand signals, escape routes etc so everyone is on the same page. Andy said he does general checks of the post and where things are and checking with post chief where boundaries are. 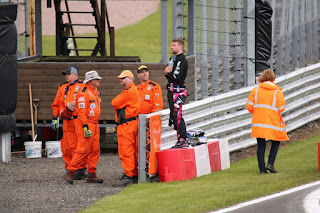 Obviously you introduce yourself to other marshal's on your post if you don't already know them, apparently banter and having a laugh is 'a standard fare' I bet it can be fun, getting to know people and telling stories. Lewis said there is 'amazing camaraderie' and that you can meet some 'seriously interesting' people. 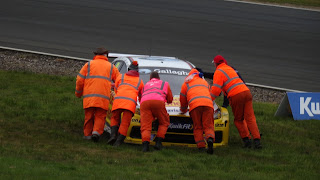 Joe told me sometimes you'll be on a post where 'little to nothing happens' but at other times 'you'll be faced with things to do every session' Sounds like a case of expect the unexpected! Lewis said they normally have things prearranged as to who is doing what so if anything happen's they jump into action, do what they need to do, then they continue their chats and having a laugh. Seems like a good plan to me. Joe said there is 'no feeling like being out from behind the barrier helping a stranded competitor'. 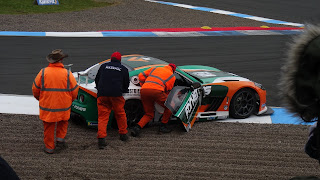 I have been told lunch is sometimes referred to as the 'L' word because they don't want to scare it away! While us as fans watching always have a dedicated lunch break, it can be shortened due to safety cars and red flags. However, marshal's are the ones who clean up the track and have to make sure its ready for the next race so if there has been long delays, there could be no lunch for marshal's. 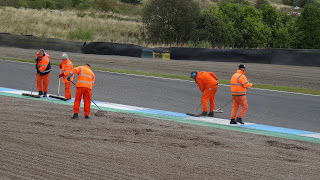 Saturday night sounds like a lot of fun if i'm honest. Making their way to the campsite something via the bar apparently! Having a few beers (or your drink of choice) with other marshal's and having a BBQ. I wish when I am camping I could go to the marshal campsite, probably could I just never know where it is. I would love to see them after a long day, sounds like they just chill out before going to bed and getting up early to do it all again and normally with more chaos on a sunday. 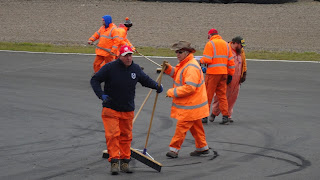 I cant begin to imagine how tricky it could be with weather conditions as well in steel toe boots and orange overalls, keeping hydrated must be key in hot weather. Cant be much fun in cold and rain, however it does provide more action normally so maybe they're so busy sometimes they don't even notice! Good on all of them for doing it, I've even been told someone has done it in snow, unbelievable. 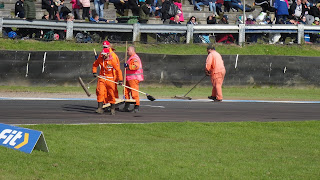 Two long days keeping everything under control, I applaud them all. I couldn't do the 12 hour day they put in. To any marshal at Silverstone this weekend, at the end of each race I wont just be clapping for the drivers, I'll be clapping for you too.

Hope you have all enjoyed part 3 of the marshal series, the final one will be next week!