F1 Testing: Is it worth going to?

May 11, 2020
So this year one evening I made the impulse decision with Fern to go to F1 testing in Barcelona this year and have a paddock pass for a day. Before I knew it, it was 25th February and I was driving to pick up Fern. Got to the airport and parked on the third level in section D, obviously we saw the reference to Daniel Ricciardo! It was a sign the next 48 hours would be incredible.

Upon landing in Barcelona we were greeted by our driver Davide who took us to our hotel, another F1 reference, it just seemed they kept coming! We unpacked, laid out our clothes for tomorrow and went to sleep with alarms set ready for the following day! We woke up, had showers and got ready for the day before heading down to breakfast, it was time to fuel up. There was lovely food and when doughnuts are on offer for breakfast who am I to say no? There wasn't many people other than a couple of F1 team members. We got picked up by taxi and taken to the track where the day begun. I wore jeans, comfy trainers and a Charles Leclerc pocket shirt Fern designed! 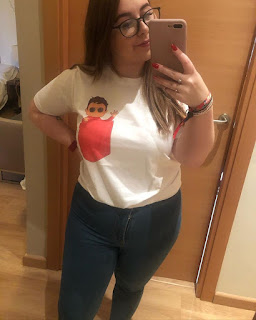 We arrived at the circuit and queued for our paddock passes which we had for the day! I remember coming out of the gym one evening and Fern had messaged me loads saying there was just one day left for paddock and should we book, so we did! There was a lot of walking about, up and down the paddock seeing whats going on, looking to see if there was any drivers about! My goal was to meet and have a picture with Charles Leclerc, didn't quite realise that everytime a Ferrari or Mercedes driver appeared there was always a mass of fans! Fern is a massive fan of McLaren who were down the bottom of the paddock, nearly as soon as we got down there Lando Norris was about and we got pictures with him! It was so exciting for me, a surreal moment to just enter F1 paddock for first time and within 10 minutes have a picture with a current F1 driver! We got some drinks by the stall just by paddock and Fern had sweets to keep us going! The shop also caught our eye, I bought a baggy circuit de Catalunya top (not just because I forgot to pack pyjamas) and Fern treated herself to a big circuit coat. We walked to the nearest grandstand to the paddock and watched and took pictures as the cars went by. Could also see in the distance Latifi when his Williams broke down. We also did the pitwalk at lunchtime and as I am small I was able to squeeze in gaps and get some good pictures of the cars! I think this day I did around 18,000 steps which is a huge increase for me. The day went so quick but it didn't end when the track action did. 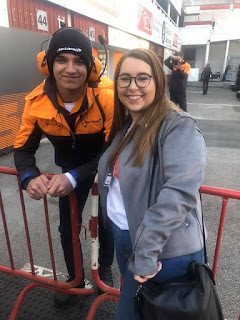 Afterwards a group of us went down to Montmelo to a tapas place Fern had been to before to try tapas and proper Sangria! It did not disappoint, there was so much food, all the dishes were very tasty! I feel really lucky Fern encouraged us to go eat there and I am so glad I tried tapas too! I can be a bit fussy but was determined to be optimistic and i was pleasantly surprised. We all enjoyed our meals (after using google translate to read the menus) and drank Sangria or another drink. The company was also very great, there was 7 of us and I only knew Fern up till that day so it was so nice to get to know everyone else and have a laugh! Definitely think everytime we go testing we need to hit up that tapas restaurant! 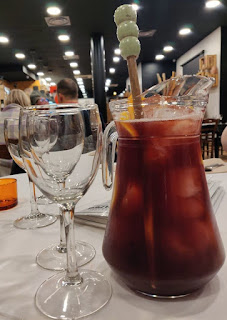 Back at the hotel we just went to sleep to prepare for the second and last day! We had an afternoon/evening flight so needed to leave the track around 1pm to get back to the hotel and checkout and to the airport. Early morning to get ready again and off we went! This time we had a track tour, we got to watch from above the pitlane, funny enough above Ferrari garage so I was fairly happy! Just as they wanted to move us along the car came in so some people stayed to watch and take pictures of that! We were shown some little rooms like all the screens with all data etc on! They allowed us a paddock pass for about 15 minutes, wasn't as long as we were promised. Fern and I walked down to the end at McLaren but I headed back up to meeting point early to stop at Ferrari for a few minutes hoping Charles would appear but he didn't. However, just before we were all about to meet to move on I saw a crowd of fans go round Ferrari hospitality so I dashed down there and it was Charles! I put myself in a good position, he was coming my way (you also have to get your elbows out a bit, especially since I am very short!), Charles was next to me and I was about to take a picture when someone pushed me out the way, I hope he enjoyed his selfie! It was disappointing but I stood next to and saw Charles so wasn't the end of the world, still very grateful! Next was hopping on a coach which went round the inside of the circuit. It was really cool to see that and stop at moments to see cars coming round the corners.

After that was over we had a few hours left. We headed over to the grandstand opposite the pitlane and had a snack while watching the cars, at one point we were opposite Haas and could see Grosjean getting into to his car. Since it was hot we got an ice cream and walked about two thirds of the circuit which took a while, I am a slow walker sometimes! We stopped at the stadium section for a bit and that has very good view of a good few corners and photo opportunities! There was no shade though, I wish I had taken a hat with me! It was hot and sunny but I wish I had prepared more! I have been to the circuit once before but didn't walk round it, only up to the first corner so it was really nice to see a lot more of the circuit and other view points! I loved going with Fern as she knew all the good view points, 10/10 as a guide! 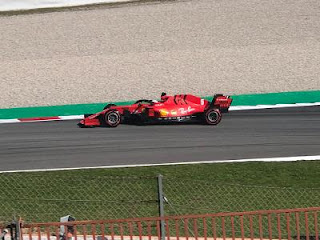 After that it was slow walk out and saying goodbye to the cars and the circuit. Our driver Antonio (yes another driver we encountered that had a F1 related name) It was a really quick 48 hour trip but for me it was incredible! Made so many memories with Fern, we nearly boarded the wrong flight and went to Berlin instead of Barcelona, met some incredible new friends, met some drivers and Zak Brown. We even made it on the circuits social media page! A few of us were in the paddock and a couple of guys said they were making a video and all they needed was us smiling and waving, so we did it thinking why not, it wasn't until one of us was watching a video the circuit had uploaded that we saw we were in it! 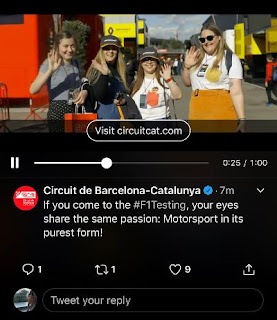 It really was just such an incredible time, it was sad to come home but testing allows you to get up close with cars, potentially with drivers too if you have a paddock pass and make some memories and new experiences! I will 100% be heading to testing again, I would recommend it to anyone! I had such a great time I decided to encapsulate those feelings and get a tattoo of the circuit to go above the one I have of Silverstone! Now every time I see it I think of all the fun times and memories. 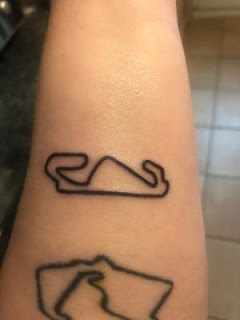 I hope you have all enjoyed this blog post, let me know if you have been to testing or would go!