July 06, 2020
So 5 years ago, July 2016 when I was 18 years old and went to see all 3 of my favourite motorsport categories race. I cannot believe it has been that long, when I realised I knew I wanted to write a post about it and reminisce.
The first race in this month I went to was Formule E, when it was in its very first season and held the season ending double header at Battersea Park in London. I had been sceptical about the series but wanted to give it a go and experience the cars with my own eyes and ears. I spoke to my cousin who lives in London and his wife Ti offered to go with me. So the day before I travelled to theirs in London. Ti had actually arranged a hen-do that saturday so at 18 years old, my cousin officially took me on my first hen-do! Dont worry, we avoided the hangover (fairly sure we had energy drinks when we got up) and took the tube to Battersea. We got ear pieces so we could hear the commentators. We walked around, I remembered it being such a nice and chill atmosphere. We decided to queue for the autograph session, while there we made friends with the couple in front of us with a young child, he was so cute. He got passed down the line from driver to driver! The first driver we met was Jerome D'Ambrosio and he was lovely, he was sat at the side of the stage and when I asked for a picture with him, he stood up next to me, I just thought that was very friendly. I got all the drivers we met to sign my ticket and picked up driver cards. I actually put them in a big picture frame and have it on my wall. It was such a fun day. We watched the race from side of the track but after the third safety car we decided to go by the stage and watch rest of the race and action from the screens. It was such a good decision because when the podium happened, we were at the front row and when winning championship driver/teams celebrated we were right there. There were girls on the stage shooting free t-shirts out of a cannon, I really wanted one but since we were front row it wasn't coming our way but luckily one of the girls spotted me and threw one to me. It was such a fun day, I don't think I stopped smiling. From that day I really got more into Formula E. I plan to go to the Rome E-Prix next year, fingers crossed it happens! 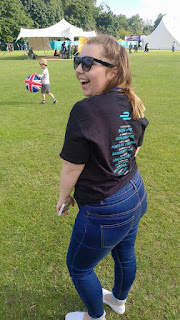 Next up was the one I was arguably most excited about, Formula 1 at Silverstone. It was my first ever F1 race and the series I was most into it. The year before my brother, dad and I all had milestone birthdays and mum bought us all sunday tickets. I remember crying when I worked out what it was and I had to wait a whole year for it to come around! We got up early, drove to a park and ride near the track and got the shuttle bus in. We had food packed, hats, waterproofs, we had everything. As we walked in the GP3 race was just finishing, we walked around and looked through the grandstand on the start/finish straight and watching GP2 start. Even those cars were loud! We decided to set up camp on the grass between Vale and Stowe. It was a good point, could see them coming towards Vale and passing us to Stowe corner or go in the pits. So we always knew who was pitting! It kept raining on and off which made the race more exciting but we had to keep covering our little picnic wed set up! My favourite part probably has to be were we walked on the track after the race and I sat on a kerb. I just remember being at my happiest as it was a surreal experience at the time, my first F1 race and something I will never forget. It also played a massive part of why I got Silverstone track tattoo'd on my arm. 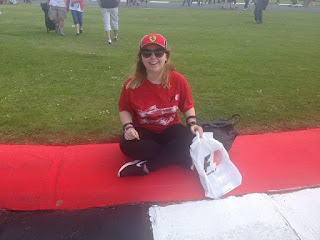 Rounding off the month was camping at Snetterton for BTCC. This one turned into a tradition for me to go to so I am super sad I cant do it for the fifth year in a row. It was me and a friend, we went in my small car, had a small tent it was quite laughable, I'd say we were amateurs. We had a BBQ in the rain and sat in my car when it chucked it down. We made friends with the people near us who took us in and honestly made the weekend so much better with their knowledge and how well we all got on. I remember a LOT of walking, buying a Snetterton shirt I still have. I cant remember if this was the saturday or sunday but the sun was shining in the morning as we were sat on the back straight, although we applied sunscreen, we got burnt. The best part was the left side was more sunburnt than the right! I remember the sunday pitwalk the four of  us all said who we wanted to meet and planned to split off and get the drivers we wanted first! Fairly sure it was the first time I met Aiden Moffat and Andrew Jordan. I just had so much fun that weekend and I have continued to do it every year since. I would always recommend camping and attending Snetterton, good weather, good racing, good atmosphere! 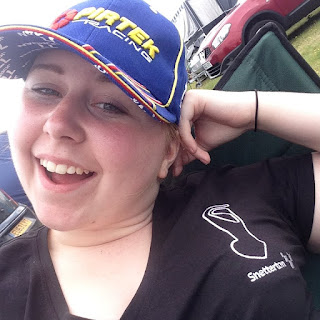 July 2016 will always go down in my history of my favourite months ever. I have so many good memories from all of these three events I was luckily enough to go to. I remember being so incredibly happy and enjoying the experiences. I haven't gone to anymore FE events, I have been to F1 Spanish GP in 2017 and testing this year, I have been to at least 10 BTCC race weekends since. My love for all three series have grown so much and I will always be grateful for the experiences I have had and hopefully the experiences I am going to have in the future.