Laser Tools Racing entered the BTCC in 2014 being run by Bob Moffat, fielding his son Aiden Moffat. Aiden did a couple of rounds in 2013 with various teams becoming the youngest ever driver in BTCC. In 2020 the team were covering the news for a different reason. They expanded to two cars with 2017 champion Ash Sutton; who won the driver’s championship and helped secure massive success for the Laser Tools team.

During the first full season in 2014 for Aiden there would have been lots of things to learn, a new car; a Chevrolet, a whole new team, but the fact he has his family alongside him would have made him feel more comfortable. I assume this first season was more focused on gaining experience and getting race weekends under his belt. It was a pointless season until the last round at Brands Hatch where Aiden was able to have two point finishes to his name and almost a third.

In 2015 Laser Tools partnered with Ciceley and Aiden found himself racing in a Mercedes-Benz A Class which helped make Aiden become a much more regular face in the mid-field with his chrome blue livery hard to miss. The team and Aiden got their maiden podium in the series when they visited their home circuit, Knockhill with Aiden finishing 3rd. Bet it felt good to get that first podium out the way and where better to do it than at his closest circuit in-front of all the Scottish fans. Aiden scooped together 77 points in his second full season finishing 17th in the driver standings.

2016 begins and Aiden starts it off with scoring points in every race of the opening round at Brands. A couple of rounds later and Thruxton, Oulton and Croft were all weekends to forget in terms of points. However, Aiden came back stronger and scored points in all of the following race weekends. He even ended the season in style and coming 2nd, his best ever finish in the final race. It was such a successful season for Aiden that he almost had double the points he did in 2015 finishing with 138 points and 14th in the driver standings.

The team continue to use Mercedes in 2017 and the first round did not go well with two retirements. That couldn’t keep them down as Aiden and the team bounced back to take their maiden win in the season together at the first round at Donington. After 3 seasons, they finally tasted champagne from the top step of the podium. They scored points in more races than they didn’t, and they were rewarded once again at the end of the season. Final race weekend at Brands and Aiden pulls another win out the bag, making a habit out of ending last race weekend with a podium! Aiden finished 13th in the driver standings with 121 points.

2018 was a mixed bag of results in terms of points. However, this time with 3 podiums, 1 more than last season; including a win at Silverstone. They scored a similar amount of points as previous season with 117 points and 16th in the driver standings. 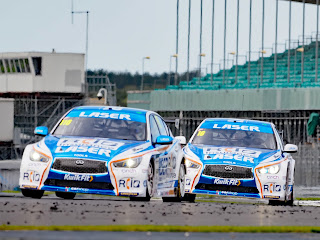 2019 rolls around and first race goes well with Aiden coming home 4th. However, the car was starting to show its age slightly after 5 years. Halfway through the season the team made a big decision. To introduce their new car, the Infiniti Q50. Personally, I think it was a clever idea to bring a new car in halfway through the season because you use those races to get used to the car, play with set up. This was a big change for Aiden as the Infiniti was rear wheel drive (RWD) and it’s not what he was used to. But he had 5 rounds and plenty of chances to drive the car. The team got its maiden podium with the Infiniti in this season. Rain started pouring just before they were about to get underway for the last race of the day at Silverstone. Teams and drivers had a decision to make, when to change to wets. Aiden’s engineer Federico called him in early and at the right time, before we knew it Aiden was through the field and chasing Jack Goff for first. I was in the garage that weekend and it was a thrilling race, although nerve-wracking when we saw Aiden spin but luckily, he kept it on the tarmac and brought it home in a well deserved 2nd place. The team had taken a risk changing cars and they were rewarded in the wet conditions.

2020 was the year of expansion. After getting the very experienced in RWD Ash Sutton to test the car back in 2019 to aid development, it led to him joining the team. Making it the first time Laser Tools had two cars with two very good drivers. Ash seemed to be on the pace straight away and that made everyone stop and look at what was happening. First weekend of the season with a new car and team and Ash secured the first win in the Infiniti. A few rounds in, you could tell after playing with the set-up Ash felt confident and comfortable in the car and making himself a real championship contender. It wasn’t long till Aiden was following suit in confidence and scoring in the top 10 multiple times. Aiden wasn’t able to step on the podium this season but did come very close with a 4th place. I am sure it won’t be long until we see a double podium finish for the team!

It looked as though this team were really finding their feet with the Infiniti and their hard work was paying off big time now. Ash won the overall and independents driver championship in the Infiniti, which is incredible. The first full season with the Infiniti’s, a new driver, a new team and they hit it out of the park. It didn’t stop there, with Ash and Aiden being so consistent and constantly in the points the team came third in the overall team’s championship but ultimately won the independents team championship for the very first time! 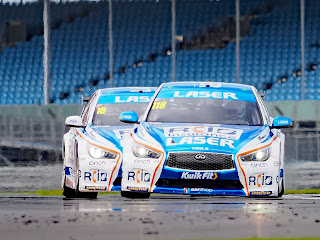 This team that has been around for years and had some success, came into the 2020 season and had faith in everyone, whole of the team, drivers and the cars and seeing Aiden’s mum Donna collect the trophy for independents on TV was so heart-warming. The Moffat’s and the team are all so welcoming and friendly. They all work so hard and to have it all pay off in the way that it did, I’m sure it makes it all worthwhile for them.

I don’t believe this will be a one off either. I strongly suspect they are going to be strong contenders for the same championships next season, and I wish them all the best.