Wow, what a season opener we had and I was so happy to be track side enjoying it all!

This season I have decided to not only vlog on youtube, but also blog my experience too in case I miss things out in my videos and I can also share pictures here! I must admit I was a bit rusty with filming, room to improve for rest of season!

It was a windy weekend but I think I almost expect that at most tracks. Got there saturday morning and boy have I missed the feeling of being at a track and the smell of burnt tyres! We all went on a mission. We all wanted new merchandise and went straight to where it normally is and there was nothing! IT HAD MOVED. So off we went to find where they had moved to, I even asked some people who were very friendly and told us where it was. So after a long walk around a the track we found it! There is so much nice merchandise this year, it was hard to restrain ourselves. I am sure we will all be picking up more bits.

After that we walked round to a viewing area to watch qualifying and none of us even wanted to predict who would get pole, first race of hybrid area and BTCC is unpredictable at the best of times but it was Jake Hill who got pole. I am happy about that, I always think Jake is an underdog and will be a major factor in the championship this year. We were lucky to see Jake and his dad Simon by garages after qualifying and saying congratulations and being all happy. 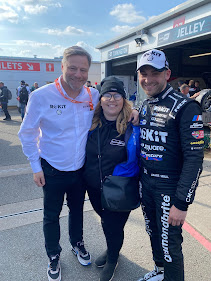 We watched the rest of the races which were Mini's and Ginettas. We watched the Ginetta's from the start finish straight and we loved watching them pull off and seeing who got a good and bad start, some of them were very varied! After that we headed to our hotel which was 5 minute drive from the track. We thought that would be great, wouldn't take long to get to the circuit, oh how wrong were we! As soon as we pulled out onto the main road and we joined the queuing traffic! It took over an hour which was ridiculous but we have learnt for next time!

I did panic thinking we wouldn't get a good spot, but we got where we wanted. But we did all say were not moving for rest of the day! We just took it in turns to look after chairs if a couple people wandered off. Charlie and I went to see our lovely people at BTCC Blueprints and got some keyrings, stickers and magnets. So if you love small stuff like that, deffo check out their website or go to their awning at a race weekend. We all treated ourselves to burger and chips for lunch. Personally I thought the food was good and yes it is on the more expensive side but it was good and I expect to pay the prices I do.

We all made race 1 predictions and said either Sutton or Hill would win and we were all WRONG. BTCC can be so hard to predict even though we all said same people. All the races were entertaining and it was just so good to be watching racing again. Lucy and I went for a walk between race 2 and 3 and we bumped into Aiden. Laser Tools had a few issues but there has been worse weekends. Everyone still all happy and willing to chat which is lovely. I did tell Aiden I wanted to see improvement at Brands Hatch because we will be doing hospitality! If him and Dexter have a really good weekend at Brands then I am going to say we are their lucky charms. 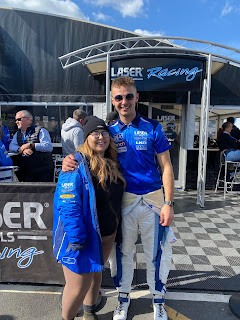 We stuck around after racing ended and watched everyone pile out of the circuit until we were virtually the only ones. We did have the screen in front of us so we watched drivers get out their cars, interviews and the podium. Then strolled out of the circuit and to the car. We didn't have to wait too long to get out so staying later worked a treat. Then finished it off with a mcdonalds when we got home and then it was the end of the first race weekend!

I have the three week wait until Brands Hatch but we are so excited as I mentioned we will be doing VIP with Laser Tools. I love doing VIP with them, everyone is so friendly and its just an incredible experience that we do it once a year now.

My Vlog below if you would like to watch that as well, as I mentioned earlier I think I am a bit rusty but I will make sure I film LOTS at Brands Hatch!